On a mission to change the world of dog mushing

Focusing on race-winning performance, along with making a positive contribution to a unique and challenging endurance sport, Team QRILL Pet is more than ‘just’ a team. Our mission is to indisputably become the best long distance dog sled team and set a new standard for all sports teams in the world.

We believe that we can create a better understanding of the sport and a unique foundation that will set new standards in the world of dog mushing. To achieve this, we have brought together the best athletes and industry players to form a team that will strive to lift the whole universe of the sport. Together we can advance pet nutrition and race-equipment and drive new research to improve the well-being of the dogs and athletes. We will also foster recruitment to ensure the next generation of the sport. 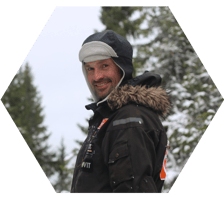 Thomas Wærner (46) is a professional long-distance dog musher and dog breeder. He owns   and runs the Berserk kennel based in Synnfjell, Norway. Thomas and his team recently gained     two victories, both at the F650 Femundløpet and in the FL1200 Finnmarksløpet (2019). In   addition to winning, Berserk kennel received the veterinarian award for best animal welfare at   the FL1200 Finnmarksløpet (2019). In 2015 he was crowned “Rookie of the year” at the Iditarod     race in Alaska, where he finished 17th. Thomas was announced best dog breeder in 2013, in the   same year he won Finnmarksløpet and came 3rd in Femundløpet. He has a total of 8 international medals. Besides his devotion for his dogs and to the sport of dog mushing, he runs the company Torpa El, a technology company based in Torpa. Originally from Oslo, Thomas today lives with his family and dogs in Synnfjell, a three-hour drive from the capital.

Watch our interview with Thomas

I JOINED THE QRILL PET MUSHING TEAM BECAUSE I BELIEVE THAT WE CAN MAKE THE SPORT GREATER. THE TEAM SETUP WILL NOT ONLY BE BENEFICIAL FOR THE MUSHERS, BUT ALSO FOR THE DOGS, THE RACES AND EVERYONE INVOLVED IN DOG MUSHING. WE HOPE TO MOVE THE SPORT FORWARD AND INVITE MORE TEAMS TO THE SPORT. 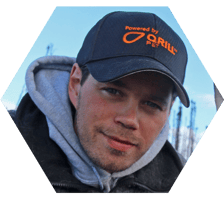 Joar Ulsom (33) started skijoring in his hometown, Mo i Rana, Norway. From there he ran a variety of small races with borrowed dogs until he started his own kennel in 2008. After developing his kennel in Norway, he moved to Alaska in 2011 and began to pursue a career in mushing. He became the Iditarod champion in 2018 and can also proud himself with being the only musher in history to finish Iditarod in top-7, in all his seven starts. Joar has also participated in the Yukon Quest, the Kuskokwim 300 and is currently a 2-time winner in the Nadezhda Hope Race, where he became the first non-native to win.
Joar is based in Willow, Alaska. When not mushing or taking care of his dogs, he enjoys exploring Alaska and all the fun activities that the great state has to offer.  Joar is a                                              life-time member of Rana Trekk-og Brukshundklubb, based in Mo i Rana. 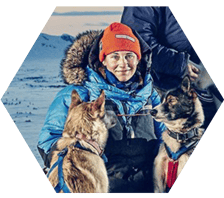 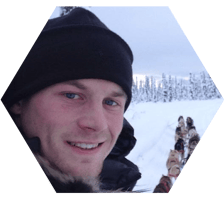 his racing teams for the Iditarod Trail Sled Dog Race. In 2004 Dallas’ father Mitch won his
first Iditarod and Dallas was hooked. In 2005, Dallas competed in his first Iditarod race and became the youngest person ever to finish the grueling 1,000-mile race. In 2009 Dallas started his own racing kennel and actively began the pursuit of his lifelong dream of becoming an Iditarod champion. Dallas is now a 4-time Iditarod champion and has twice broken the race’s speed record. He has also won the 1,000 mile Yukon Quest, making him
one of only 6 people ever to hold a title in both races. 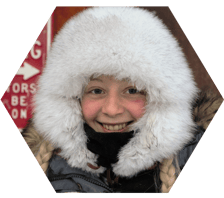 Hanna Lyrek (19) is the youngest musher on the QRILL Pet Mushing Team and the first young talent to join the team as a part of the recruitment strategy. After three years as a junior musher, she is finally old enough to participate in the longer races, and in this year’s season she has done great. Hanna raced the F650 Femundløpet (2019) and became the youngest to ever participate and win the FL-500 class in Finnmarksløpet. Hanna has previously completed Bergebyløpet 650km and Finnmarksløpet 1200km. She has had an interest in dog mushing all her life. At the young age of 4 Hanna went on her first dog sled trip by herself in Alaska, where she lived as a young child, before moving to Norway.  She currently lives with her family and their dogs in Alta. Hanna strives to become one of the top mushers in the years to come and after this year’s achievements it is safe to say that she is well on her way.

Along with Aker BioMarine’s brand QRILL Pet, the team is sponsored by Felleskjøpet with their dog and cat food brand Appetitt and Non-stop Dogwear. We hope to extend the partnership to a global level whilst the attention to the sport grows. We see great potential in the sport of dog mushing. Thanks to this incredible sport and our inspiring mushers we will be able to really drive innovation, improve dogs’ health, along with promoting the sport.

Sled dogs are special animals that need a special diet designed to cover their nutritional needs. With this in mind, QRILL Pet has set on a journey to investigate the sport of dog mushing.  The brand had a fantastic experience with a pilot sponsorship over the last years with Sigrid Ekran, Thomas Wærner and Joar Ulsom, helping to improve their dogs’ overall endurance and well-being.

In a study with 5 weeks of 8% krill meal inclusion in diets for Alaskan Huskies prior to the 2016 Iditarod dogsled race – a thousand mile endurance exercise known to induce muscle damage and inflammation – showed that the 40% increase of the Omega-3 Index in the krill group decreased muscle damage and inflammation when compared to the control group.

Now, QRILL Pet wants to take the sponsorship to the next level and thrive further research to improve the health and well-being of sled dogs, while building the sport and reaching more awareness globally.

Appetitt is a Norwegian super premium dog and cat food brand owned by Felleskjøpet Agri. Appetitt is produced with only high-quality ingredients where a majority of the ingredients are sourced from Norway. The most popular selections contain a high inclusion of QRILL Pet, a superior source of omega-3s for pets. Each selection of Appetitt has been developed with major research and care. The content of energy, protein, fat, minerals and vitamins in the various types are optimized and cover the different needs for every dog size. With Appetitt every dog will always get a feed adapted to their needs.  Having a deep understanding of the nutritional needs of dogs, Appetitt has developed a special formulation for sled dogs to cover the needs of these unique athletes.

Non-stop dogwear was founded in Norway, 2009. Today Non-stop dogwear develops, designs and sells high-quality dog equipment worldwide, currently, you can find their products in over 1,000 stores in 22 countries. Non-stop strives to make the best dog equipment. The company has been a long time player in the sport of dog mushing, not only supplying equipment for the dogs but also producing unique jackets for the athletes. Consisting of a young team the company has a "can do" attitude and is a perfect partner to bring the sport of dog mushing forward.

About the most famous long-distance races

The Iditarod Trail Sled Dog Race is also known as the Last Great Race on Earth, is an annual long-distance sled dog race held in March. Started in 1973, the race covers a trail from Anchorage to Nome in Alaska and is one of the toughest and highly competitive races. The Mushers and a team of 16 dogs cover a distance of 1000 miles / 1600 km in 8-15 days.

Finnmarksløpet is Europe’s longest and the world’s northernmost sled dog race. The race was first to run in 1981 and covers a distance of 1200 km across Finnmark in Norway.

The Femund race is an annual long-distance dog sled race started 25 years ago. The race starts in the historic mining town of Røros, which is listed among UNESCO's World Heritage Sites.

*If you wish to get in touch with the team, are interested in becoming a sponsor or forming your own team, please contact us through the link below. 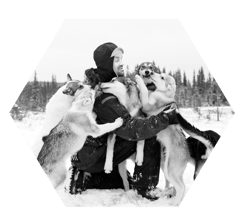