In these articles, we will explore the history of the sport, the technical setups and not to mention the special nutritional needs of these amazing dogs. Anything from the deep arctic wilderness, to the remarkable mind of a musher.

Let's start with taking a look at the exceptional sled dog and share knowledge on how a sled dog team is set up.

Dog Mushing is a sport and transportation method powered by dogs. It involves the use of one or more dogs, called a dog team, to pull a sled on snow, or a cart on bare ground.

Great teamwork between the dogs and mushers might be the most important factor in order to be successful in this sport. If you already know how such a team is set up, use the following as a refresher. However, if you have no knowledge, then we hope it will be an interesting and educational first article of the series!

A sled dog & the team

A sled dog is a dog trained and used to pull a sled over snow. Traditionally, dogs were used to facilitate the everyday lives of their human counterparts, especially while hunting and as a means of transportation. Today sled dogs are mostly used for recreational purposes and racing events, like the Iditarod Trail and Finnmarksløpet.

During such a race the dogs will be put on a team where the dogs are given titles according to their position, relative to the sled and musher. These include Wheel dogs, Team dogs, Swing dogs, and Lead dogs.

The wheel dogs are usually the strongest, as they are the ones pulling and steering the sled. They are positioned directly in front of the sled. A good wheeler must have a relatively calm temperament, so as not to be frightened by the sled moving behind.

The team dogs could also be called the “horsepower” of the group. They help turn the sled and maintain speed. They are positioned after the wheel dogs and before the swing dogs.

Depending on the size of a dog team, one can have up to six or more team dogs on the sled. Alternatively, the term could be used to describe any dog in the dog team. 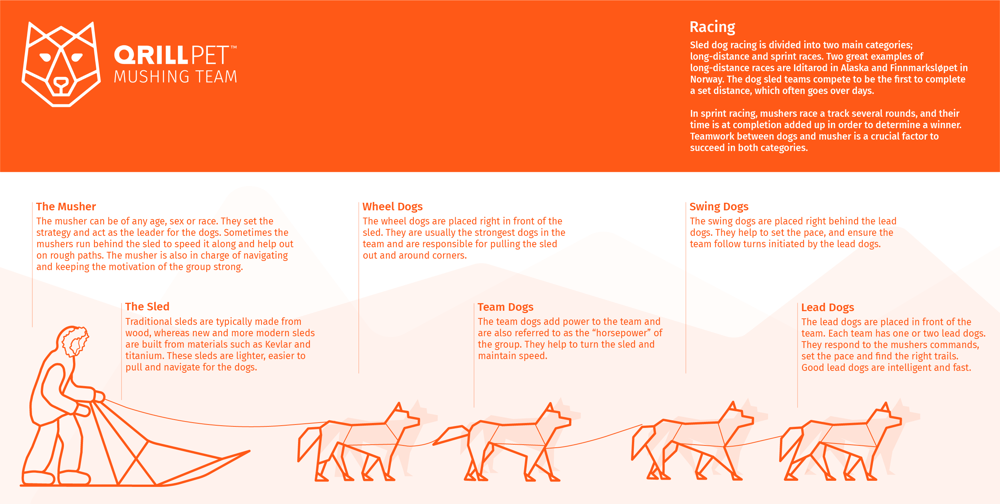 The swing dogs help set the pace and ensure the team follows turns initiated by the lead dogs. They can also be identified as right or left swing dogs, depending on which side of the tow line they are positioned.

The lead dogs are positioned in the front of each team. Leaders may be single or double, the last alternative is more common now. Their job consists of responding to the mushers' commands, set the pace, and ensure correct direction.

Sometimes a leader may be unhitched (a loose or free leader) to find the trail for the rest of the team under bad conditions. This practice is uncommon and is not allowed during races. Qualities for a good lead dog are intelligence, initiative, common sense, and the ability to find an almost non-existing trail.

The power ingredient for Iditarod champions

It is important to emphasize the significance of each role the dog can have in the group. A musher needs to be able to rely on all dogs in their position, in order to have a well-functioning team during a big race, excursions, or training.

As earlier mentioned, dog mushing is based on teamwork and the special relationship between the musher and the dogs. Dog mushing is a truly unique sport in that sense unlike any other.

The power ingredient for Iditarod champions

Since the very beginning of the Iditarod race in 1973, few have been crowned with the Iditarod Champion title. 24 unique athletes to be exact. Three of them fed their champion dogs with pet food powered by QRILL Pet.