A new study, recently published in Veterinary Medicine and Science magazine, put omega-3 fatty acids to the test, comparing the effects of short-chain (alpha-linolenic acid) versus long-chain (EPA and DHA) fatty acids in the diets of 20 Alaskan Huskies.

“There is a great deal of awareness and evidence on the importance of omega-3 fatty acids for canine growth and health. However, the important difference is that it is the long-chain omega-3s that are associated with health benefits and not the short-chain omega-3s,” says Tonje Elisabeth Dominguez, Director of QRILL Specialty Animal Products.

“This means that even the most discerning pet food buyers may not be fully aware of the source and type of omega-3s that they are feeding their dogs,” she adds.

20 dogs in total, divided into two test groups, over a 42-day trial

Over the course of the six-week study, the 20 Alaskan Huskies (aged one to six years) were randomly divided into two test groups. One group received a feed supplement of short-chain fatty acids (1068 mg alpha-linolenic acid in the form of flaxseed oil), while the other group received a supplement of long-chain fatty acids (1155 mg EPA/DHA, in the form of QRILL Pet AstaOmega Oil, a krill oil blend from Aker BioMarine).

The dogs were examined by a veterinarian both at the start of the study, and at the three- and six-week milestones, at which points blood samples were taken for analysis. The researchers compared the effects of the flaxseed oil to the QRILL Pet AstaOmega Oil on the dogs, to determine which supplement had the greatest impact on the omega-3 index, which is an indicator of the amount of health-promoting fatty acids present in red blood cell membranes in the dogs. 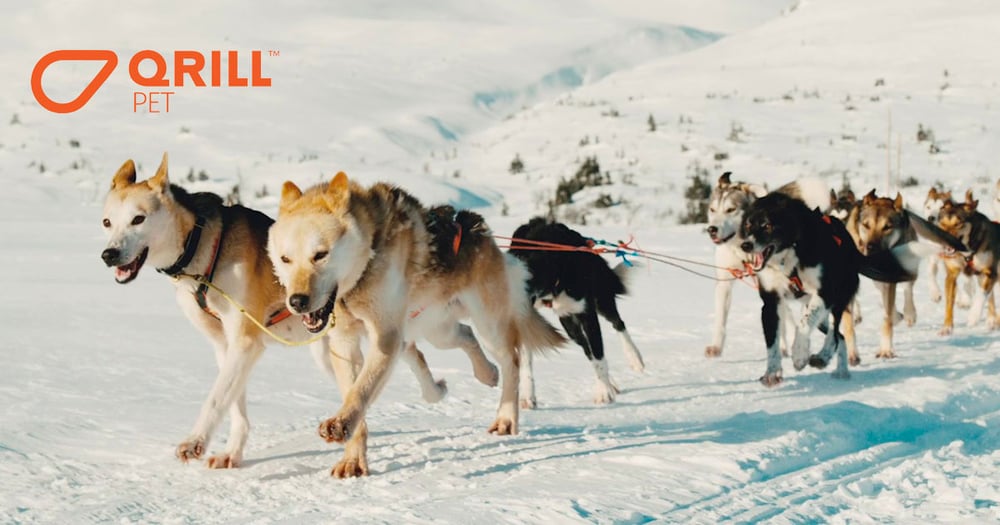 “Based on this study, it is evident that only the dogs receiving the long-chain fatty acid supplement, in the form of QRILL Pet AstaOmega Oil, experienced a significant increase in their levels of EPA and DHA. This was shown by the increase in this group’s Omega-3 Index levels, which reinforces previous evidence that the long-chain omega-3 fatty acids are much more effective in ensuring the overall health of dogs,” states Dominguez.

The authors of this study concluded that more attention should be directed to the type of fat sources that are used as feed supplements or in diet formulations for dogs. This is necessary in order to ensure that a significant amount of the health-promoting long-chain fatty acids through marine-based sources are present in the canine diet.

The original study is titled “Enhanced omega-3 index after long- versus short-chain omega-3 fatty acid supplementation in dogs”. It was recently published by Veterinary Medicine and Science and is available here.

There’s no dispute that omega-3 polyunsaturated fatty acids are beneficial to canine diets, but the omega-3 source can impact absorption in the body. In a new study from Aker BioMarine, a team of scientists sought to uncover the dietary effects of omega-3s from Antarctic krill meal versus fish oil.

With the pet industry continuously innovating, the search for new functional ingredients is on the rise. A new publication from Aker BioMarine unveils that the choline levels of Alaskan Huskies increased by 52 percent after receiving a krill dietary supplement for six weeks.